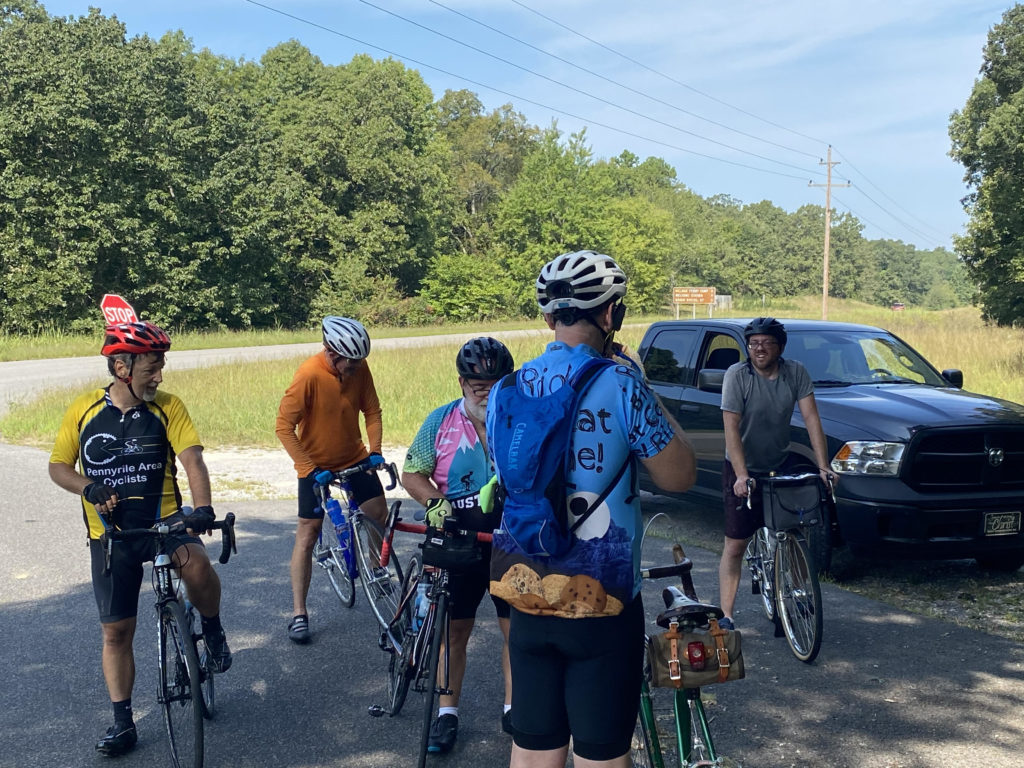 The 3rd annual Bourbon and Tobacco Tour was held on September 12th and 13th, with the road and trail routes both in Land Between the Lakes (LBL).  The weather was good on Saturday morning, but the afternoon proved to be a wet one.

We were fortunate that a friend and local cycling buddy volunteered to be our SAG driver for the road ride.  Many thanks to Greg for his time and effort on our behalf.  Having a SAG driver was a first and a luxury for our little ride.

We rolled out from the Golden Pond visitor center just after 10am with 5 riders – myself, Doug from Madisonville,  KY, Nic from Springfield, IL, Mike from Louisville, KY, and Bob from Memphis, TN.  The temps were in the 70s, and the humidity was up.  The clouds parted once we were on the course, and we had sunshine for probably half to three quarters of the ride.

We headed north on the Trace road, no steep climbs but longer shallower climbs than we would see later.  We were pretty much together as we reached Silver Trail road where we turned east off the Trace road.  Silver Trace is a really nice section, maybe 3-4 miles long, running through the LBL forest.  At the Nature Center, we turned south and immediately passed an old iron ore furnace from the mid-1800s.  After this point the hills start to show up pretty quickly.  Up and down some nice rollers, and we cross the Energy Lake dam.  From this point south to 68, the hills start to bite.  Some steep climbs at up to 14% but most not quite that steep tested the legs.  This was the hardest section of the north loop.  We regrouped at the parking lot on the north side of 68, the hard climbing done for the north loop.  We headed west on 68 to the turnoff for Wrangler’s Camp, and headed south away from 68.  Some easy rollers and we turned right to head back to the Trace road.  A few more rollers on this section, and we came out on the Trace road about a half mile south of the visitor center.  Just a few minutes later we were back to the start point.

The plan was to re-hydrate, re-fuel, and head out for the south loop.  But we heard some sounds that were suspiciously thunder-like.  It could have been trucks on 68, but sadly it wasn’t.  Checking the radar, there were storms coming in from the west, and a large blob of rain following them.  We decided to pack up and head into town to get takeout for a late lunch at the park in Cadiz.  I went home and changed clothes, got lunch and met the others at the park.  It was nice to sit around and talk while we were rained on.

We decided to meet on Sunday for the trail ride, and we talked our SAG driver, Greg, into riding with us.  It was very generous of him to follow us around LBL and to help with drinks and snacks as we rode.  Quite a luxury.

We met Sunday morning at the Wrangler’s Camp turnoff on 68, and we took Greg’s truck up to the Golden Pond visitor center and left it there with drink and snacks in it.  We rolled out at roughly 10am.  Doug, Greg, and myself were the only victims today.  The Hardwoods Trail is in very good shape and we had a good climb up to the visitor center.  A bottle of water and some fig newtons and we continued west towards Kentucky Lake.  This section is mostly descending, going down English Hill, which we will have to climb very soon.  We stopped at the Fenton picnic area and shot the breeze for a little while.  Then we headed out to climb English Hill on our way back to the visitor center.  Greg decided that he would take his truck from there, and meet us back at the Wrangler’s Camp turnoff.  Doug and I continued east and met Greg there.  A good trail ride, good company, and cooperative weather made for a really good day out on the bikes.

That’s the 3rd annual Bourbon and Tobacco tour post-mortem.  We’ll be back for the 4th annual ride in 2021, hopefully in mid-April depending on circumstances.  Best wishes for safe riding in 2020, and for a better year next year for everyone.